AUD/USD halts a four-day decline as it snaps the series of lower highs and lows from the monthly high (0.7314), and fresh data prints coming out of Australia may generate a larger rebound in the exchange rate as employment is expected to increase for the second consecutive month.

AUD/USD appears to be reversing course ahead of the monthly low (0.7130) as the US Dollar weakens against most of its major counterparts, and the exchange rate may stage a larger rebound over the remainder of the week as Australia is projected to add 43.4K jobs in December.

As a result, the Unemployment Rate is expected to narrow to 4.5% from 4.6% in November, and a further improvement in the labor market may generate a bullish reaction in the Australian Dollar as it puts pressure on the Reserve Bank of Australia (RBA) to normalize monetary policy.

It remains to be seen if the RBA will adjust its forward guidance as the central bank remains on track to “purchase government securities at the rate of $4 billion a week until at least mid February 2022,” but another rise in employment may encourage Governor Philip Lowe and Co. to draw up an exit strategy as “the economy is expected to return to its pre-Delta path in the first half of 2022.”

However, a dismal employment report may drag on AUD/USD as the RBA “is committed to maintaining highly supportive monetary conditions to achieve its objectives of a return to full employment in Australia and inflation consistent with the target,” and the board may look to further support the economy at its next meeting on February 1 as the Omicron variant continues to pose a threat to global growth.

In turn, the diverging paths between the RBA and Federal Reserve may produce headwinds for AUD/USD as Chairman Jerome Powell and Co. prepare to implement higher interest rates in 2022, and a further decline in the exchange rate may fuel the recent flip in retail sentiment like the behavior seen during the previous year. 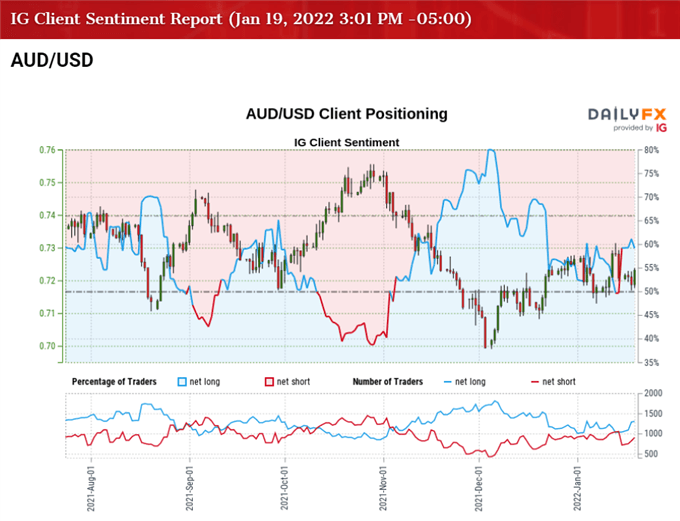 The IG Client Sentiment report shows 60.07% of traders are currently net-long AUD/USD, with the ratio of traders long to short standing at 1.50 to 1.

The number of traders net-long is 3.02% lower than yesterday and 21.53% higher from last week, while the number of traders net-short is 4.69% lower than yesterday and 16.37% lower from last week. The rise in net-long interest has fueled the recent flip in retail sentiment as 50.99% of traders were net-long AUD/USD last week, while the decline in net-short position comes as the exchange rate snaps the series of lower highs and lows from the monthly high (0.7314).

With that said, the update to Australia’s Employment report may fuel the recent rebound in AUD/USD if it shows a further improvement in the labor market, but a dismal development may lead to a test of the monthly low (0.7130) as it casts a weakened outlook for growth and inflation in Australia.