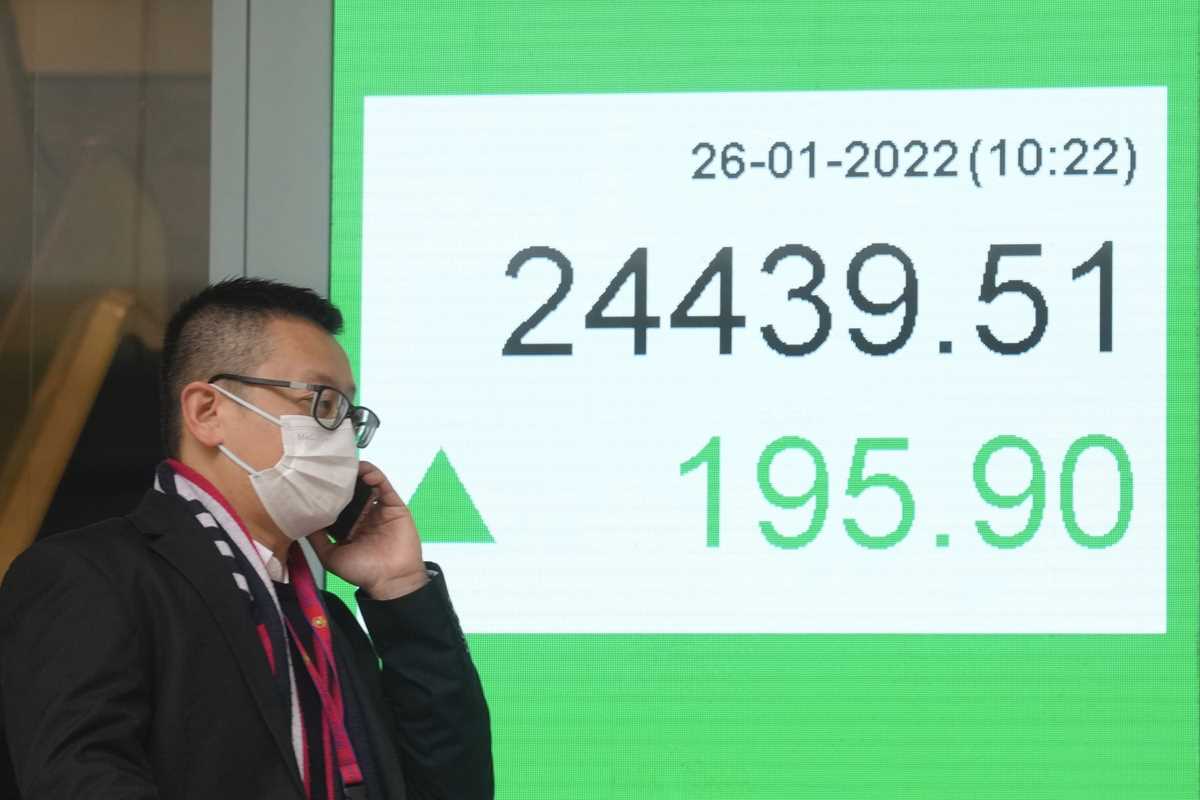 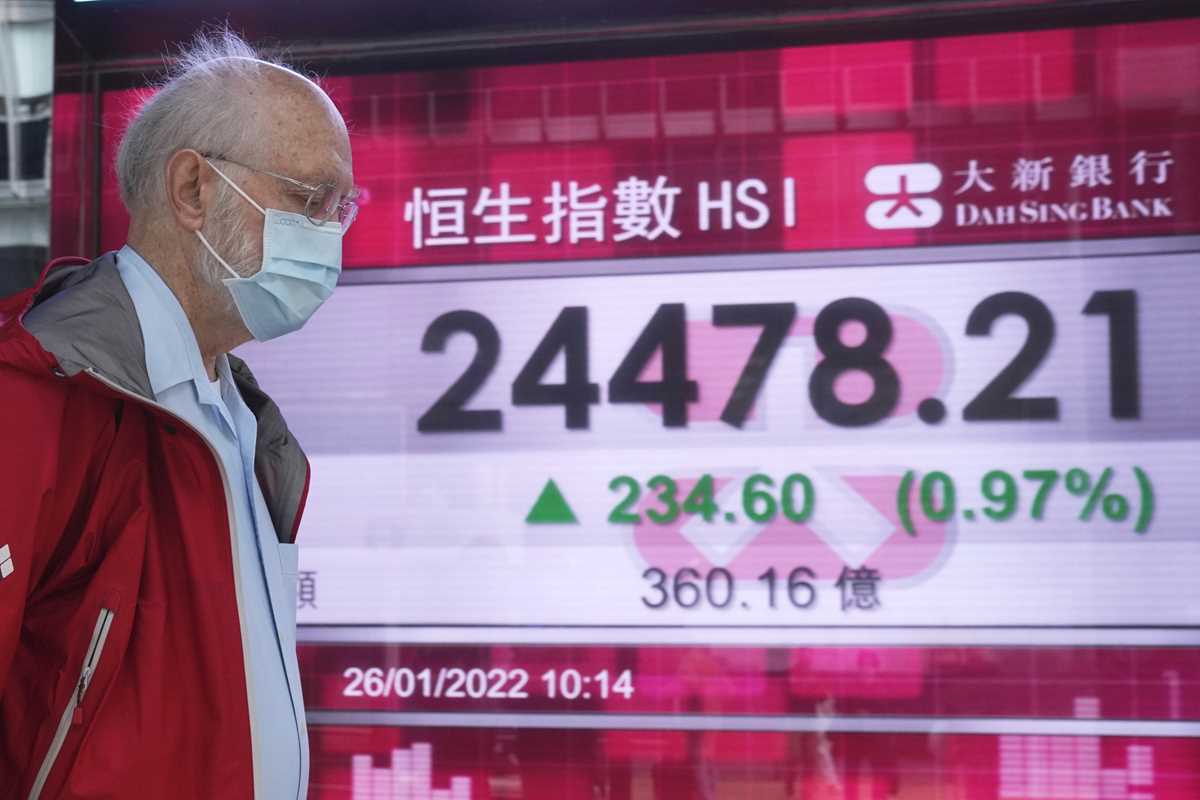 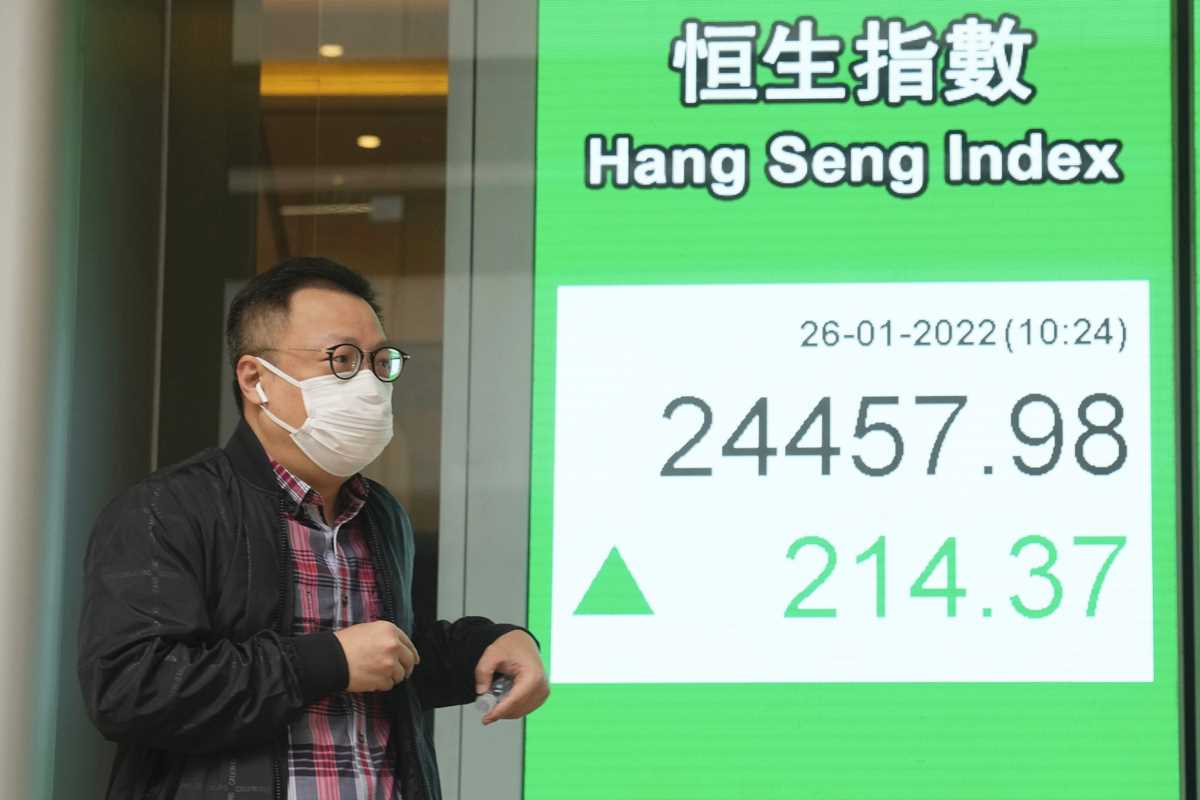 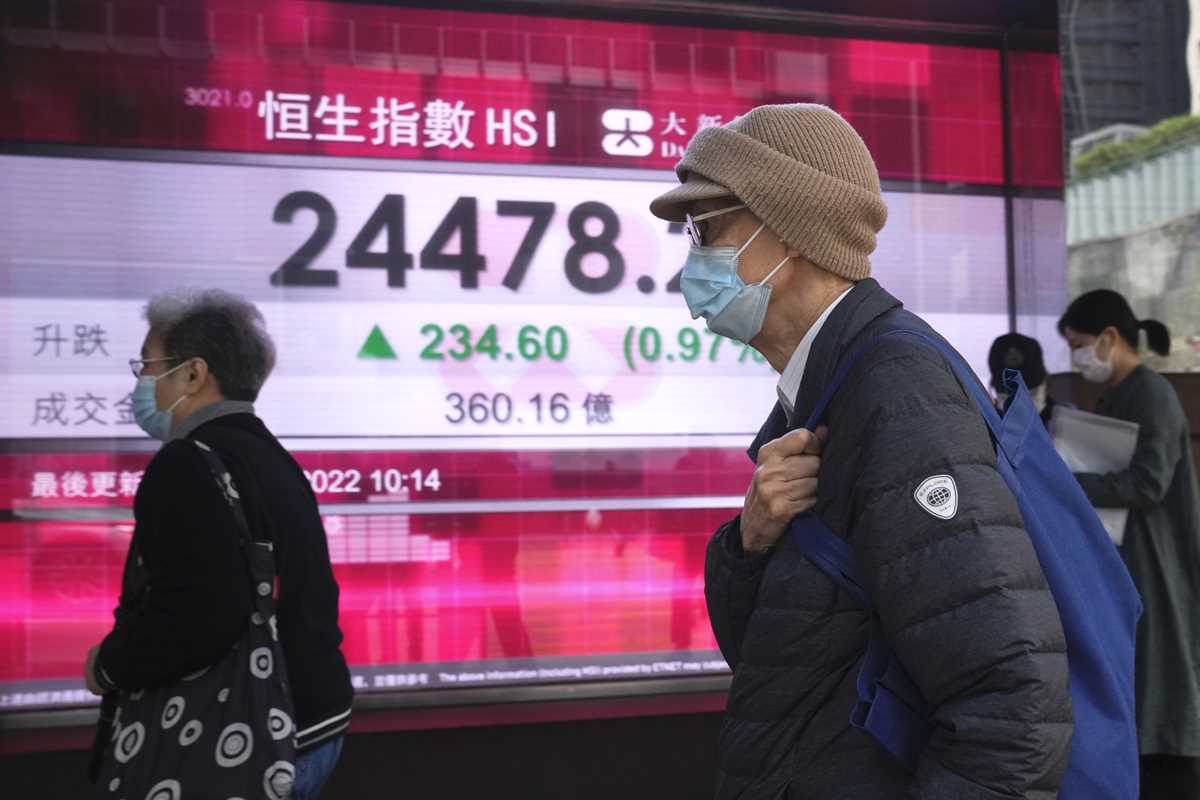 People wearing face masks walk past a bank’s electronic board showing the Hong Kong share index in Hong Kong, Wednesday, Jan. 26, 2022. Asian shares were mixed in muted trading Wednesday as many stayed on the sidelines ahead of a U.S. Federal Reserve meeting that will indicate how aggressive it will be in fighting inflation. (AP Photo/Kin Cheung)

TOKYO (AP) — Asian shares were mixed on Wednesday, with many investors staying on the sidelines ahead of an update on how aggressively the Federal Reserve will tackle inflation.

Stocks have gyrated this week amid heightened scrutiny on the Fed’s meeting and whether the U.S. central bank will clarify just how fast it plans to tighten credit and potentially slow the economy.

“Asian equities were mixed on Wednesday with the region lacking direction after another volatile session in the U.S. ahead of the Fed monetary policy decision,” Anderson Alves, a trader at ActivTrades, said in a commentary.

At the same time, tensions over the Russia and Ukraine tensions continue to grab attention, Alves noted.

Ukraine’s leaders have reassured their country that an invasion from neighboring Russia is not imminent but acknowledged the threat is real and received a shipment of U.S. military equipment to shore up their defenses.

Moscow has denied it is planning an assault, but it has massed an estimated 100,000 troops near Ukraine in recent weeks and is holding military drills at multiple locations in Russia. That has led the United States and its NATO allies to rush to prepare for a possible war.

Some on Wall Street worry that on Wednesday, the Fed may signal it plans a half-point increase in its key rate. There is also concern that Fed Chair Jerome Powell could suggest that the central bank will raise rates more times this year than the four hikes most economists are expecting.

On Tuesday, shares came well off their lowest points by late afternoon. But another burst of selling in the final hour of trading pulled them lower yet again. Technology stocks were the biggest drag on the market.

Retailers and communications companies also fell. Home Depot fell 1.3% and Netflix fell 5.4%. American Express surged 8.9% for the biggest gain in the S&P 500 after the credit card company reported that its fourth-quarter earnings rose 20% from a year earlier.

Higher inflation has been squeezing businesses and consumers, and the Federal Reserve is expected to combat it in 2022 by raising interest rates. Investors fear that the Fed could either be moving too late or could be too aggressive. The central bank issues its latest policy statement Wednesday.

The pandemic still hovers over the economy, threatening to crimp progress with every new wave of infections. The International Monetary Fund cited the omicron variant as the reason it has downgraded its forecast for global economic growth this year.

In energy trading, benchmark U.S. crude lost 8 cents to $85.52 a barrel in electronic trading on the New York Mercantile Exchange. It jumped $2.29 to $85.60 a barrel on Tuesday.

Brent crude, the basis for pricing international oil, picked up 8 cents to $87.26 a barrel.