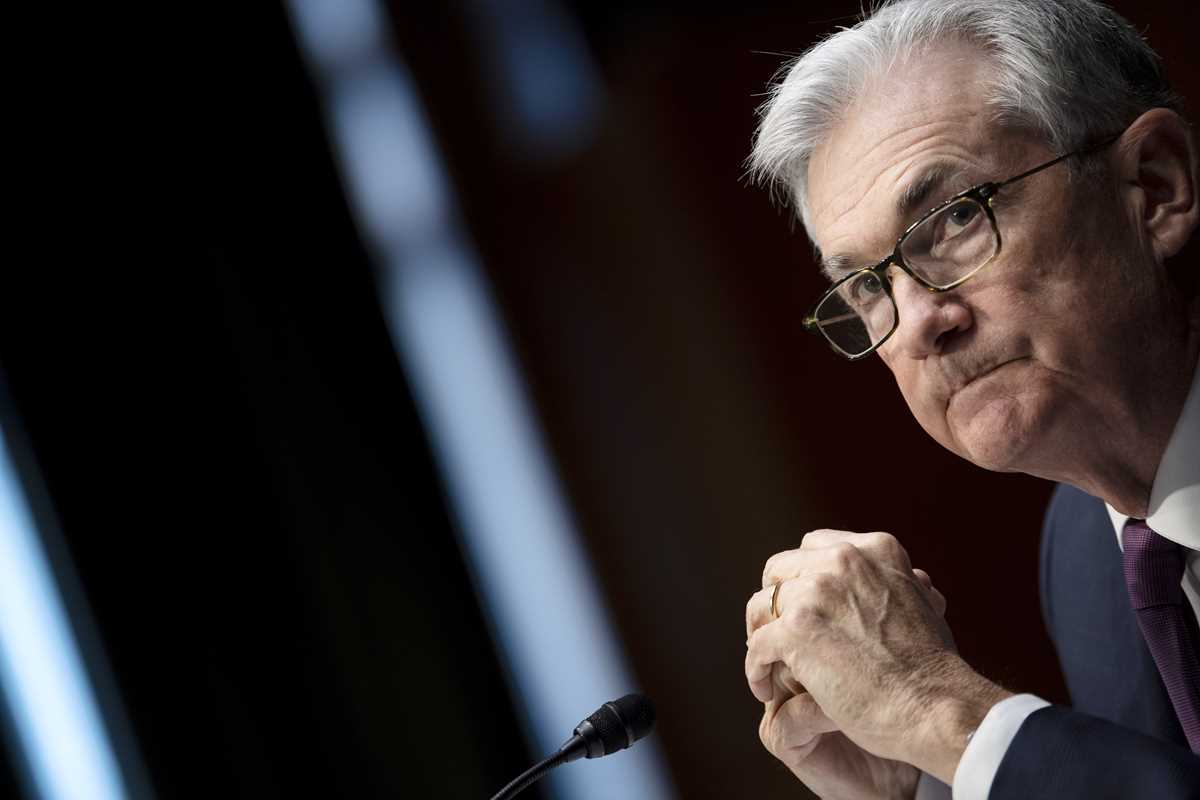 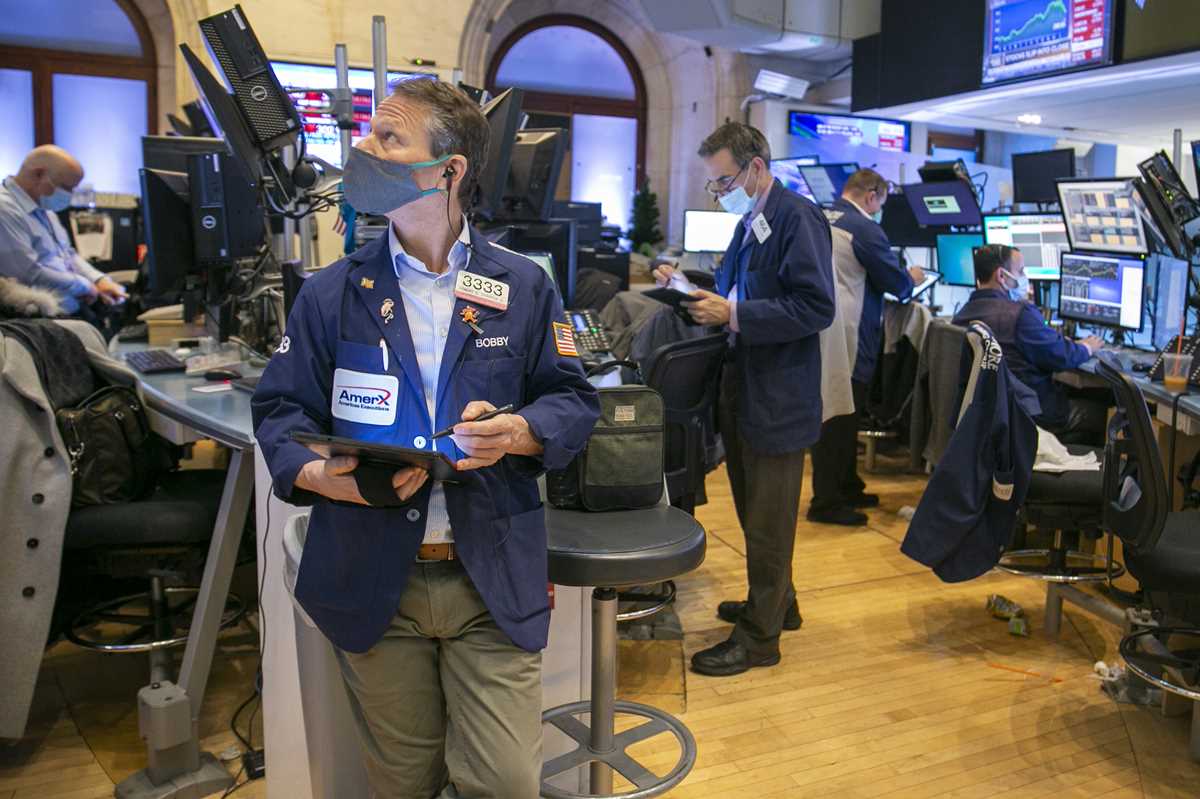 Traders work on the New York Stock Exchange floor in New York, Tuesday, Jan. 25, 2022. Stocks are closing lower on Wall Street Tuesday after another volatile day of trading. Technology companies like Microsoft were again the biggest drag on the market. (AP Photo/Ted Shaffrey)

WASHINGTON (AP) — Wild volatility in the stock market this week has put heightened scrutiny on the Federal Reserve’s meeting Wednesday and whether the Fed will clarify just how fast it plans to tighten credit and potentially slow the economy.

With high inflation squeezing consumers and businesses, the Fed is expected to signal that it will raise its benchmark short-term interest rate in March in a dramatic reversal from the ultra-low-rate policies it imposed during the pandemic recession. To further tighten credit, the Fed also plans to end its monthly bond purchases in March. And later this year, it may start reducing its huge stockpile of Treasury and mortgage bonds.

Investors fear there may be still more to come. Some on Wall Street worry that on Wednesday, the Fed may signal a forthcoming half-point increase in its key rate. There is also concern that at a news conference, Fed Chair Jerome Powell could suggest that the central bank will raise rates more times this year than the four hikes most economists expect.

Another wild card — particularly for Wall Street — is the Fed’s bond holdings. As recently as September, those holdings were growing by $120 billion a month. The bond purchases, which the Fed financed by creating money, were intended to reduce longer-term rates to spur borrowing and spending. Many investors saw the bond buying as helping fuel stock market gains by pouring cash into the financial system.

Earlier this month, minutes of the Fed’s December meeting revealed that the central bank was considering reducing its bond holdings by not replacing bonds that mature — a more aggressive step than just ending the purchases. Analysts now forecast that the Fed could begin shrinking its holding as early as July, much sooner than was expected even a few months ago.

The impact of reducing the Fed’s bond stockpile isn’t well known. But the last time the Fed raised rates and reduced its balance sheet simultaneously was in 2018. The S&P 500 stock index tumbled 20% in three months.

The Canadian lithium staking rush is heating up and this explorer may be ahead of it all.

If, as expected, the Fed raises its key rate in March by a quarter-point, it would lift the rate to a range of 0.25% to 0.5%, up from near zero. The Fed’s moves are likely to make a wide range of borrowing — from mortgages and credit cards to auto loans and corporate credit — more expensive. Those higher borrowing costs, in turn, could slow spending and weaken corporate profits. The gravest risk is that the Fed’s abandonment of low rates, which have nurtured the economy and the financial markets for years, could trigger another recession.

Those worries have sent stock prices fluctuating wildly. The Dow Jones average plunged more than 1,000 points during Monday’s trading session before recovering and finishing with a modest gain. On Tuesday, the S&P 500 closed down 1.2%. Steady declines since the start of the year have left the S&P down nearly 10% — the level that investors define as a “correction.”

Economists have forecast that when the Fed does start allowing some of its $8.8 trillion in bond holdings to roll off its balance sheet, it will do so at a pace of $100 billion a month. By not replacing some securities, the Fed in effect reduces demand for Treasuries. This raises their yields and makes borrowing more expensive.

Yet some analysts say they aren’t sure how big the impact on interest rates will be or how much the Fed will rely on reducing its balance sheet to affect interest rates.

“There is a fair bit of uncertainty about what to expect,” said Michael Hanson, global economist at JPMorgan Chase.

Gennadiy Goldberg, U.S. rates strategist at TD Securities, said that Wall Street has also been unnerved by the sharp jump in the inflation-adjusted interest rate on the 10-year Treasury. That rate has jumped by one-half a percentage point just this month, an unusually swift rise.

All of which means Powell will face a delicate and even risky balancing act at his news conference Wednesday.

“It’s a threading-the-needle story,” Goldberg said. “They want to continue to sound hawkish — just not so hawkish as to create extreme market volatility.”

If the stock market is engulfed by more chaotic declines, economists say, the Fed might decide to delay some of its credit-tightening plans. Modest drops in share prices, though, won’t likely affect its plans.

“The Fed does not at all mind seeing a repricing of risk here but would want to see it in an orderly fashion,” said Ellen Gaske, lead economist at PGIM Fixed Income, a global asset manager.

Some economists have expressed concern that the Fed is already moving too late to combat high inflation. Others say they worry that the Fed may act too aggressively. They argue that numerous rate hikes would risk causing a recession and wouldn’t slow inflation in any case. In this view, high prices mostly reflect snarled supply chains that the Fed’s rate hikes are powerless to cure.

This week’s Fed meeting comes against the backdrop of not only high inflation — consumer prices have surged 7% in the past year, the fastest pace in nearly four decades — but also an economy gripped by another wave of COVID-19 infections.

Powell has acknowledged that he failed to foresee the persistence of high inflation, having long expressed the belief that it would prove temporary. The inflation spike has broadened to areas beyond those that were affected by supply shortages — to apartment rents, for example — which suggests it could endure even after goods and parts flow more freely.