After a couple of tough days in the market, investors had to sort out the non-farm payrolls report on Friday. At the end of the day, it was another relatively flat day in the market. With that in mind, let’s look at a few top stock trades for next week. 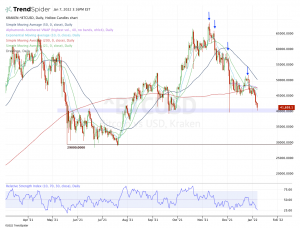 Bitcoin (CCC:BTC-USD) has been putting in a series of lower highs since topping out in November. It’s broken below all of its meaningful daily moving averages and is now down into the key $40,000 area.

Depending on what data provider one uses, Bitcoin is either near or has even broken below the flash crash low from last month.

In that event, perhaps it finds its footing near the 21-month moving average. Below that, and the $30,000 area is likely in play.

On the upside, however, bulls need to see Bitcoin reclaim $45,000 and the 10-day moving average. If it does that, its other daily moving averages are on the table, followed by $50,000. 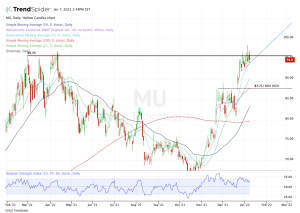 Micron (NASDAQ:MU) is a name I have kept on my go-to list ever since it surged higher on earnings and has essentially ignored the recent correction in the stock market.

While the stock finally broke to new all-time highs (with the prior high coming into play at $97.50 from the year 2000), Micron has pulled back recently.

Shares are testing down into the 10-day moving average, giving bulls a dip-buying opportunity. Starting Monday, investors who are long or looking to get long can consider inching their stop-loss up to this week’s low.

On the downside, though, a break below this week’s low could ultimately put $92 in play, then the 21-day moving average. 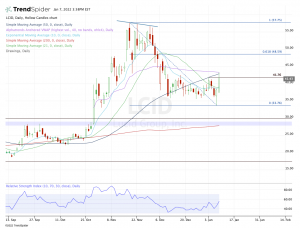 Lucid Motors (NASDAQ:LCID) has been in a slumber lately, but woke up on Friday, rallying 13.3% at one point. From Thursday’s low to Friday’s high, the stock was up 28%.

However, Lucid Motors ran right into its 50-day moving average and daily VWAP measure. From there, the stock faded, which was to be expected.

On the downside, $40 is a key level, along with the 10-day and 21-day moving averages. A break back below those marks puts $36 back in play. 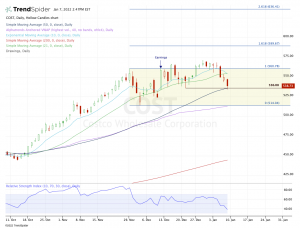 Costco (NASDAQ:COST) is another interesting stock from Friday’s action. Shares came back and tagged the post-earnings low near $536, which was also a support area after the company reported earnings.

That level coincided with the 50-day moving average and the stock was a relative strength leader until this week (where it technically declined all five days). However, two of those daily losses were less than 0.2% and three of them were less than 0.5%.

In any regard, the relative strength combined with the level of interest at $536 and the 50-day moving average made Costco a buy today.

We got a decent bounce out of it, but bulls are obviously looking for more. If they get it, $550-plus is in play, with the 10-day and 21-day moving averages on the table above that.

On the downside, a break of Friday’s low and a failure to reclaim it should have bulls cautious and/or potentially stopping out of their long position (depending on their trading objective and risk tolerance).

On the date of publication, Bret Kenwell did not have (either directly or indirectly) any positions in the securities mentioned in this article. The opinions expressed in this article are those of the writer, subject to the InvestorPlace.com Publishing Guidelines.

Bret Kenwell is the manager and author of Future Blue Chips and is on Twitter @BretKenwell.